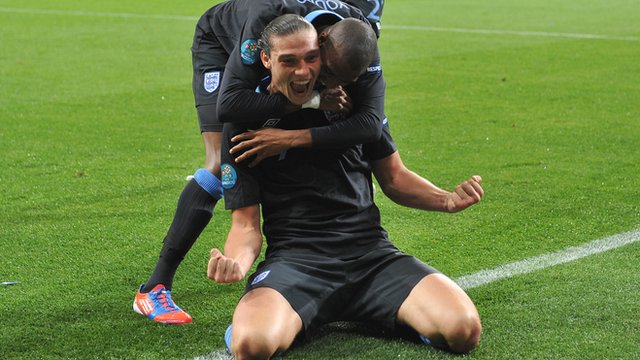 The season-long deal for the England striker could result in a £17m transfer at the end of the campaign, provided the Hammers stay in the Premier League.

However, it is thought the 23-year-old Carroll does not wish to leave Liverpool on a permanent basis.

The Reds, who paid a club-record fee of £35m for Carroll in January 2011, have already turned down Newcastle United's bid to re-sign the player.

Carroll has struggled since his big-money move to Liverpool, scoring just 11 goals in 56 appearances.

He now appears to be surplus to requirements at Anfield following the arrival of former Swansea boss Brendan Rodgers and Italian striker Fabio Borini from Roma.

Rodgers had said Liverpool would not consider a loan move for Carroll but now appears prepared to allow the player to link up with former Newcastle manager Sam Allardyce at Upton Park.

Carroll had also been linked with a transfer to Italian side AC Milan.

The striker began his career at Newcastle, spending a season on loan at Preston, before returning to the club and becoming top-scorer in the 2009-10 season as the Magpies returned to the Premier League. The deal announced will see Chevrolet, which is already the club's official car partner, will become only the club's fifth shirt sponsor in their history.

The value of the agreement, which will commence in 2014, remains undisclosed but is thought to be in excess of the current £20 million a year deal with Aon.

Manchester United's commercial director, Richard Arnold, told the club's official website: "This is a fantastic, long-term deal for the club. We have been partners with Chevrolet for only six weeks, but already they have produced some fantastic ideas that will benefit both the partnership and our 659 million followers around the world.

"They are a key partner on our current tour and I know they have enjoyed experiencing the buzz generated by our fanatical support and the sell-out crowds in South Africa, China, and Europe.

"It is a great thrill for those of us who work with partners all year round when an existing partner steps up to being one of our principal partners. This commitment to United and its fans will bring real benefits to everyone who cares about the club.''

Alan Batey, General Motors' North America vice-president, US sales and service, added: "We are extremely proud to connect our brand, Chevrolet, with Manchester United and their passionate supporters all around the world.

"Manchester United's statistics are impressive, but this relationship goes far beyond the numbers - this relationship is about connecting our brand with the deep-seated emotion that surrounds the team everywhere it goes.

"When you consider the core values of Chevrolet, our passionate customers around the world, and our rich 100-year history, the partnership with Manchester United is a perfect fit.

"And, to be only the fifth name on the iconic red jersey is a genuine honour. We very much look forward to the road ahead and the opportunities we have in partnering with such a legendary club.''